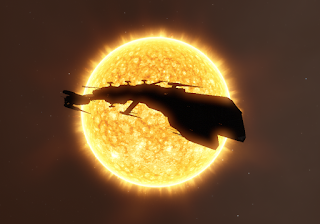 There have been some great new content-driving events coming in Eve Online lately. Two of them are driven by things that came straight from CCP announcements at FanFest. Notably the Blood Raider engineering complex and the promise of the blueprints that will come from it's destruction. The second is the player outposts being turned into faction Fortizars as they are removed. The third content comes from player origins and embodies the sandbox that is Eve. Outside of this, we all keep looking for our own content too.

There have been plenty of people speculating on how the Blood Raider event sites being in Imperium controlled space might lead other people to invade that space. PL/NC of course comes to mind for just about everyone as the only force that is actually big enough to threaten the Imperium in their new home. It seems unlikely that all of the groups that came together for World War Bee could be gathered together with this motivation.  For many the point was made when the Imperium crumpled, and for others it was a once-in-a-lifetime event that simply doesn't feel the same when repeated. I don't know much about the great power balance between PL/NC forces compared to the Imperium but it seems unlikely that even PL/NC would truly be able to shake loose the Goons hold on that space. It seems far more likely that they will threaten to hot drop an operation on these Blood Raider sites but not leave any truly lasting impact. In the end it will then be a question of how efficiently the Imperium can farm these sites, but there's going to be a significant learning curve it seems.

The conversion of players outposts is an unexpected value proposition for content, but one that people started running the numbers on as soon as mentioned at FanFest. The spectulation is that these faction citadels will be greatly in demand and thus whoever holds control of them at the flip point will be able to pack them up, move them to market, and resell them for a tidy profit. I have heard one quote of 12T ISK for all of the outposts in Providence, for instance, but there's obviously a lot of speculation behind those numbers given that final stats haven't been released yet. But the promise is enough to make some people start eyeing their favorite starmap.

That ISK making opportunity may be at least part of what is behind the third content source that we are seeing right now. The Anime War, as it has been dubbed is truly player generated content. For the origins of this "war" all you need to do is travel to reddit, though I've linked above to the PCGamer article because it's impressive that it's gotten attention from beyond the silly world of reddit. But the bottom line is that Provi Block and their allies have been attacked by PL and fam perhaps because for the eventual ownership of the outpost mentioned above. Whether or not that is the cause is almost irrelevant in the sense that it is something that has captured the players' imagination. For such a diehard group of nerds as we Eve players are, a battle over freedom for anime (or freedom from anime) just makes sense.

In my smaller corner of cluster the Gallente Militia have moved on to attempt to invade the Amarr side of factional warfare. This is pretty much entirely because the Caldari suddenly disappeared from the war in any effective sense. When I last found that my interest in Eve was waning I took a vacation in my Stratios. I came back because there was of the sudden rush of the Caldari against our war zone, and I felt motivated to help defend my friends at arms in the militia. Now as I look at how things are moving in terms of content it seems unlikely that should I go on another vacation there will be a new content source such as that to pull me back. I also found that it was difficult to find individual targets for a solo roamer, or perhaps I just didn't look long enough and enough places. This may also mean that I just need to bring an alt, even if not well-trained, to help me take slightly riskier odds when in strange places. As much as the wars in Providence sound like they could be fun i'm not sure if being the in +1 number of a nightmare fleet would really be that much more motivating. It also seems like most of the content there is concentrated in the European time zone.

The good news is that heading into what could be a quiet period in the game we are seeing content coming from both CCP and from the players themselves. What I need to figure out for myself is where I could get into content, or if I need to make a stronger attempt at generating my own content. With the currently limited amount of time I spend in game I would need to have a means to get to content that fit that budgeting of my time. The alternative is something that plenty of Eve players do, but I have not yet done myself, which is to take a break for these warm summer months and let my other hobbies have more of my time. If I follow that path certainly know Eve will never be too far away since discord and other channels will always be there.  You can logoff, but you can never leave...

(Most of this article was "written" by voice-to-text on my phone, which led to some hilarious and hard to recognize changes.  If there are any still left, my apologies.  See also "for action for desires", and "set Adele")
Posted by Unknown at 12:30 PM No comments: Links to this post