Ah, new spaceships.  When a patch with new ships is coming up I'm sure they can hear the gleeful rubbing of hands all the way to Reykjavik.  The initial theorycrafting has been done, the reports are in from SiSi, but nothing will really compare to seeing the ships in action on Tranquility.  Everytime there are new ships introduced into Eve, you can expect that a fair number of kills will happen just because people don't have them loaded in their overviews.  Then there are ships such as the command destroyers that give a good ol' whack of a mallet to the spinning top that is the Eve meta.  But can there by too much of a spaceship thing?  I'd say that we should look at how we learn and process these new ships, as well as what design bar should be set for introducing new ships based on their place in the meta.


Too Many Ships Spoil the Sandpit?

We all like important internet spaceships right? The more spaceships the better right? Or are we getting too many to be easily to remember them all. A Mastodon on scan? That the hell is that and what does it do? Oh! Never mind!

Are we getting too many ships. Is it too complicated to remember them all and what their traits are? Do FC's these days need an encyclopedic knowledge of ship types unless they want their fleet to DIAF. With more and more ships being released each year will we ever reach "too many" or do you think there can never be too many important internet spaceship types?

(thanks to Drackarn - see his and other bloggers responses, also the Blog Banter homepage for previous banters)
---

Siri: what is a Rapier?

As a new capsuleer I remember distinctly a spaceship knowledge problem.  I had moved away from my Gallente early training with a goal to work my way up through all the races.  My brand new Artillery Thrasher with minimal shield skills was set to demolish things.  I decided to wander through belts in lowsec, which was a lot of fun in my Thorax.  I was aligning off to the next belt when a Rapier dropped out of warp nearby.  Rapier?  That's a frigate, right - and destroyers eat up frigates.  I just need to keep at the edge of my long point range, make him come straight at me (my understanding of transversal was largely from blaster-brawling) and ... wait, I'm webbed - at this range?

I got my pod out and had a nice chat with the Rapier pilot.  I told him about my mistaken identity problem and we had a good laugh.  He assured me that my Thrasher fit was pretty standard, and told me a bit about how he tracked me down using d-scan.  Like many 1v1 roaming fights, it ended with both pilots being reasonable people having fun with a game. 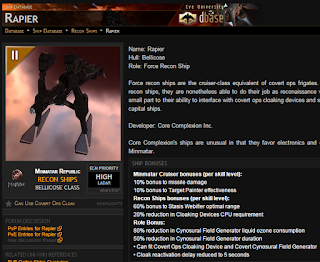 I still don't know what all the ships in the game are bonused for, though mostly at the high end of the range.  I certainly don't have the lowest resists memorized, and if I was in a projectile or missile ship more often that would be more of a goal.  When I have a moment for figuring things out I'll hit the excellent Eve-Uni Ship Database.  I know some people are fond of the new d-scan data tool Inflight.

Of course even a tool like this can be overwhelming, and plenty of players won't be aware it even exists.  Teaching new players how to use third-party resources is something all newbro friendly corps should embrace.

For players who are in touch with the meta (and since, Dear Reader, you are reading this then this means you) there have been great blogs in the past.  Rixx Javix occasionally writes a blog about the state of the T1/T2 frigate meta like The 5 Best T1 Frigates post from last September.  I'm sure many of us mourn the absence of Azual Skoll's Know Your Enemy entries from his Eve Altruist blog.  We bloggers (particularly those who are at the higher levels of PVP skill) certainly can help reassess the ecosystem of Eve for newer players or those who simply are looking for a way to wrap your head around what all these ships can do.

All this doesn't absolve CCP of a need to provide better information.  If the new ship icons had been in place when I had that encounter with the Rapier, I would have noticed that it wasn't the tiny little triangle that indicated a frigate and at least been aware that I was facing a cruiser-sized ship larger than my destroyer.  I haven't read all of the other BB71 blogs, but I noticed a good idea in Kirith's Kodachi's post for a (possibly optional?) hover-over affordance that would provide some ship information.

A Chessboard with only Pawns is just Checkers

There is a huge richness to having all of these ships, bewildering as they are.  It rewards the player who builds up knowledge and skill in how to use that knowledge.  You can listen to a top-level streamer like Fintarue roll off the expected range of a medium neut from a capwar bonused ship and see how that is informing his engagement range even as he reloads ammo to match the weakest resist expected on that hull in the current meta.  This is what separates people like him from people like me, and people like me from month-old new pilots who have just joined factional warfare.  I don't think many Eve players would argue for a dramatic reduction in the diversity of the ship ecosystem.

I do agree it's part of the infamous learning curve for pilots.  This morning I was talking to a coworker who recently got back into a game.  He feels like he's a newbie again when he logs into his main with the wormhole corp he hasn't flown consistently with for a couple years.  He nearly got taken out by a T3D gang because he didn't have them on that character's overview.  His subscription lapsed and part of the barrier to getting back into the game is knowing that there is a wall of new information between him and playing at the level he used to.  It's tough... but it's also part of what draws really intelligent, strategically thinking people like him to a game like Eve.  And it's why when Eve players want to take a mental break on a given night they'll fire up some substantially less complicated game.

I do think that CCP needs to think carefully about where each new ship goes.  Adding ships which are particularly special use or PVE-focused (like the Noctis or Epithal) do not add to the mental wall of the new PVP-oriented player.  Extremely rare ships (such as AT ships) also aren't the kind of thing that are going to inhibit uptake of the overall system of ships since they'll be so rarely seen.   New ships at the very top of the food chain (such as Force Auxillaries or concepts like T2 supers) impact a group of players that are already very conversant and in touch with the meta, and thus are also not a problem.  T3Ds and CDs are counter-examples that a PVP player in any area of space needs to be aware of or be wiped across the metaphorical floor.  They introduce something new into the game - perhaps something that needs balance work, but a whole new angle.  Eve is a game that can use such disruptive technologies added once in a while.  I'd argue that the design criteria for such base level disruptive ships to be added should be a high bar.


So I'd argue that Eve should continue to have new ships, but their place in the ecosystem has to be carefully considered and both CCP and those of us in the meta should do what we can to help newer players come up to speed on this complex game.  It's part of what we love about the game, so keep it coming!