After Eve Vegas when the capital balance changes were first announced, I decided to make the leap and slotted in Advanced Spaceship Command to get into a capital ship. There are a lot of expensive schoolbooks involved and very long training cycles, as I noted in my blog at the time. I was looking forward to being able to get into a Moros that would have utility in lowsec beyond POS takedowns.  That was on 31 October, so I'm all done and a capital pilot now, right?  Not exactly.

Since then I have deprioritized some of this capital training as we learned more about the capital rebalance and what it really means in practice. High angle weapons don't have quite the punch against subcapital targets as we might have hoped. That's still a very expensive ship to put on the line to try to blap subcapitals with given the DPS numbers. (Though I'm amused to hear of MBC HAW Titans on the Saranen undock) 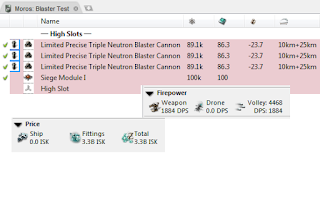 I know I didn't show the full fit (it wasn't good, don't worry) but that 3.3B for fittings is notable (and I didn't go as shiny as many I'm sure).  As I talked to local capital pilots and got advice on slave implant sets for the traditional buffer tanking approach.  We'll see if the new active-tank pirate implants end up making the scene for smaller engagements (oh, and that means Capital Repair Systems skill). In any case, that means another couple billion ISK. My wallet will definitely need reinforcement long before I can undock such a capital ship, given a guideline of being able to immediately replace any ship (and pod) that I undock. In other parts of Eve players could rationalize buying a carrier knowing that they could use it for high-value ratting to help pay the cost of that same carrier. That is not exactly advisable in low sec, and definitely not in a dreadnought.  The carrier meta does look very interesting, though it is an even longer and more expensive training cycle.

But what has really derailed my plans though is the ongoing use and value of battleships in both PVP and PVE. When I started down the capital training road I only had Gallente Battleship V. While the Dominix is a quite serviceable battleship for fleet use, the king of the PVP subcap mountain today is the Machariel.  Like most of the PVP focused corps around lowsec, RDRAW has a Machariel doctrine, which makes Minmatar Battleship V seem like a good value train.  On a side note, I went to slap a T2 Heavy Neut on my Machariel and realized that I'd never trained that to V either - since until the neut rebalance there wasn't any reason to use T2 neuts.  So that's another couple days of training. 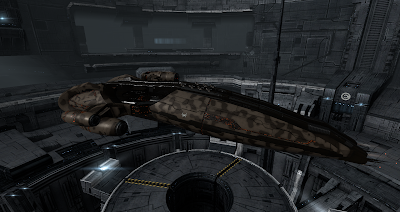 On the PVE side the Rattlesnake is the undisputed moneymaker whether you're running L5 missions or hopping through a WH to hit nullsec anoms. Fortunately this also uses Gallente Battleship for offense, though the Caldari Battleship V seems very appealing for that extra bit of resists.  In my case that also meant polishing up some missile skills.  All to get the ISK that could make it possible to get that even bigger ship.  Hmm, this is starting to sound like a trap, isn't it?

Really all of these are the classic trade off of more short-term pay off compared to a very long-term payoff. Capitals are not something that I see regularly in my current line of work. Battleships are.  The capital skills will remain in the queue but have gotten pushed back by those 30 day battleship trains. At least for not I'm not tempted by the distractions of Marauder or Black Ops...

So I can technically sit in a Moros now, but I haven't spent for the hull and don't see that happening soon.  I don't regret putting in that big train for advanced spaceship command but it doesn't look like I'll be putting it to use quite as early as I might have hoped.  Instead I'll follow along and see how things develop for capital ships both in the wider universe of Eve and in the part of space in which I now reside.
Posted by Unknown at 9:41 PM No comments:

Somewhere there's a twelve-step program for Eve players, but it doesn't culminate with freeing you from your addiction to the game, but instead ends with being completely nerded out on the game.  Or as a CCP employee I suppose.  It seems that CCP is working hard to save us from that fate, making sure we can't spend too much more of our RL cash on Eve RL goodies.  But we can try.

Once again with FanFest CCP has teased us with what swag attendees can buy.  Clever t-shirts, sharp-looking button-downs, and even caps.  Oh, we can buy those on the online store after FanFest, right?  After all, the new online store is going to open in the first quarter of 2016.  Sigh.  Soon?

At least they've finally made some deal with Rixx so that we continue to see his prints for sale.  Those are sore tempting too - I'm quite curious what reactions I'd get at work if I put the print of the Myrmidon up in my office.

I could do with more of that trend.  I can understand if CCP can't prioritize all the logistics and such to get their own merch out, but perhaps can license others to use their IP and get a cut or something.  That has it's own overhead though - perhaps worse that actually getting the merch going.

I've never lived in nullsec, but I got drawn in and bought "Empires of Eve." I'm enjoying it as a history, but the sense of history as a lesson to be repeated is just too delicious not to apply to current events. For instance, fill in this Eve Mad-Lib.


I bought the paperback, somewhat cheaping out in case I found that nullsec really wasn't that compelling.  I'd recommend others to go for the hardback or the Kindle edition.  The typeset in the paperback is not dark black, and the format is smaller, so I find that I can't read it at night in bed if I'm tied - it's just too hard to focus on.  Those readers here who haven't hit their 40th birthday yet may find this isn't a problem for them though.

This year Fanfest happened to ride right along with a local school vacation week.  Since my wife is a teacher that means that if we'd planned for it then we could have both gone to Iceland, done some sight-seeing, then I could go on to Fanfest.  She's finally open to the idea... but sadly Fanfest 2017 is April 6-8.  Amazingly the wife is still on board with the idea of me going for the first time next year.  She looked over my shoulder and saw the Eve Vegas dates and suggested that, but I think I'd rather see Iceland.

But really, I shouldn't have to go to Fanfest as my only way to give CCP money for some swag...