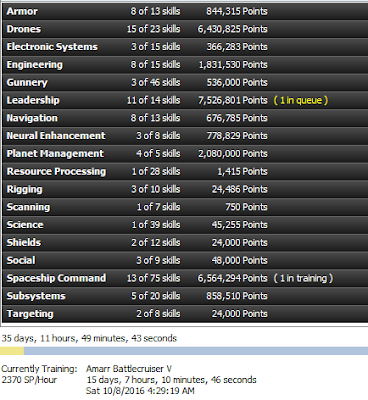 It was a quiet month for me in Eve, but not because of No Man's Sky which lost out for time disappointingly quickly.  It certainly hasn't been quiet recently in the Eve meta, with lots of big announcements coming from CCP in the form of the Booster changes and Alpha Clones.  I haven't really been away from the Eve meta, both as a contributor (CZM on Alpha Clones, CZ article on PVE), and as a consumer - primarily of podcasts.  I figured it was time for another roundup of the podcasting world, as we've had a number new ones begin and old ones fade away.  Full disclosure: as noted above I'm on the Crossing Zebras staff.  It turns out that CZ has become the home for many of the active podcasts out there, though I've found my way to some others as well.

Since this is led by Matterall, the first thing to get out there is that this isn't a Imperium-centric podcast, and apparently the recorded podcast isn't even being hosted by TMC, though you can watch the live feed on TMC's twitch.  I hesitate to call this a talk-show format, as Matterall keeps the agenda moving pretty well with a few exceptions when he is personally wrapped up in the topic.  The first couple times I listened there was a lot of post-World War Bee discussion that verged on whining, but there's a lot more beyond that.  It's a sign of a good Eve-meta podcast when you get a good range of guests on the show, and Talking in Stations brings in people such as Ashterothi, Jin'taan, and Tiberius Stargazer regularly.  I see the next one I haven't listened to has Elise Randolph as well - I think he's been a guest on every podcast I've listened to in the past two weeks.  Elise, are you running for CSM or something?

I've come to think that the ideal cast size for a podcast is three or four.  At that point the audience can identify the speaker by voice, the guests don't talk over each other as much, and it's less likely to devolve into shouts and insults.  This is why I never got into Podside and other podcasts of their ilk.  When the Jeffraider (sorry, JEFFRAIDER!) show is good then there's a smaller group, they dig into something, and you hear a good of very experienced players (yes, primarily PL) talk about how they'll be using a new mechanic or situation.  When the show isn't so great you have something like episode 30, where you start with six-seven people, then two drop and two more join and you can't keep track of the voices and it turns into a bit of a bro-fest.  In the midst of all that there's still that good, experienced player talk but you have to get through a lot to get there.  You can see that in the summaries too, such as episode 29 which is summarized as "We talked about: literally fuckin' everything."  Thanks, that's a great summary.  So if the talk show format is your thing, then this is a pretty good example.  It's staying on my subscription list, but I won't mind if I miss some.

After Hours with Rixx Javix - Recommended

Rixx Javix is one of the great personalities of the Eve meta, best known for his artwork and his Eveoganda blog.  His After Hours will Rixx Javix is a new podcast that is also hosted on CZ.  This is not a eve-meta talk show, nor a focused mechanics breakdown, or any of the other things you're used to in an Eve podcast.  This is a straight translation of the late night one-on-one interview format, complete with a lounge music intro and Rixx's perfectly matched voice.  Interviews are primarily with the personalities and "creatives" as he likes to term them.  If other podcasts tend to be shouty, energetic and hyped then this podcast is all about chilling out.  So, in the words of Rixx himself: "Grab a cold drink, light a cigar, and let's talk."

With Hydrostatic Podcast apparently faded away, Ashterothi has moved on to make a new podcast called On Grid with Elise Randolph and Mike Azariah that has a more focused approach to the topic, though not a tight as Hydrostatic was.  Ash's intro piece sounds a bit bombastic, but ignore that and get into it and you've got three very knowledgeable people from different parts of Eve that can give you a really insightful take on current events.  Two episodes in they've covered the two big recent breaking stories (alpha clones, fleet boosts) so the real challenge will be reaching for longevity and consistently hitting topics this interesting even if there isn't a new devblog out.  Definitely add it to your podcast device of choice.

Now hosted by CZ also, Declarations of War still maintains it's own website.  I miss that DoW is no longer the voice of the mercenary in Eve now that Alek is no longer running Noir, but this is still one of the strongest and longest-running podcasts in the Eve meta.  Co-hosts have come and gone (miss you NinjaTurtle and Ali Aras) but the general theme of EVE PvP (primarily nullsec-centric warfare) carries on.  If you are only going to listen to a few podcasts about Eve then Declarations of War needs to be on your list.

The NeoCom started out as a bright and energetic podcast with all of the positive energy that befits coming from the Brave Newbies / Hero Coalition side of Eve.  I always will have a great love for podcasts like this, just like the old Fly Reckless podcasts.  There's been a lot of changeover at the NeoCom and perhaps that too parallels the rise and fall of the Brave/HERO cohort in Eve.  Kira and Proto are no longer leading the podcast, but instead two streamers I'm not particularly familiar with: Manic Velocity and Elinari Rhodan.  We'll see if The Tinfoil Factory will reappear as well (one of my favorite spinoffs).  Hopefully the new crew will hit their stride and we'll see this podcast re-emerge.

Down The Pipe - Recommended

You've probably noticed that most podcasts are focused on nullsec, which is why Down the Pipe is important as the only wormhole-focused podcast I know of.  Led by Longinus Spear and his cohost Bronya Boga, this podcast has always been about getting the good fights for Bob's wormholey glory.  The podcast has faded in and out over the years, but it seems to be back up again - though episode 62 was in July, so maybe I'm being overly optimistic.  If Spear can keep this going, and you have any interest in wormhole space, then tune in.  My favorite is probably the closing segment "storytime" where the guests go over a good fight they had since the previous podcast.

Broadcasts from the Ninveah - Recommended

On hiatus now, we'll see if Kirith Kodachi's real life lets him get back into recording this unique podcast.  It is a meta-meta of Eve, since it is driven by Kirith's take on blogs that he has read and is recommending.  Over the past year it has also featured Kirith's two young sons, one of whom was giving Eve a shot.

* Eve Prosper: This is probably the most narrowly focused podcast out there, as it is all about Eve markets.  Lockefox has made a name for himself here, which is I'm sure part of why we haven't seen more Hydrostatic podcast.  If you're a market/industry player you should be listening to this.  Me... not so much.
* High Drag: High Drag has gone quiet for a while (since May).  I'm hoping we'll see it come back.  I'd like to hear more of the small-gang, solo PvP kind of point of view.
* Hydrostatic Podcast: I think with the hosts now split off to On Grid and Eve-Prosper we may not see Hydrostatic come back, though the fact that they've been publishing "Know Your Lore" might indicate that at least Phyridean isn't giving up yet.