Change it is a comin'


April is looking to be a slow month for me in Eve, but it's clear that Eve itself isn't slowing down.  There's a feeling of a lot of things coming as we head on to FanFest and the election of the new CSM.  Dev Blogs and Feature/Idea threads a plenty to keep your brain moving.  Industry Changes, Pirate Battleships and Cruisers, NOS changes.  Whew.

This looks like a huge wave of change.  If you haven't already read the Building Better Worlds Dev Blog, go do that right now.  I hope that anyone who hasn't already voted will consider moving industry knowledgeable people such as Steve Ronuken to the top of their ballot.

I have to say that this graphic was very exciting, though perhaps largely for what I might be projecting on it: 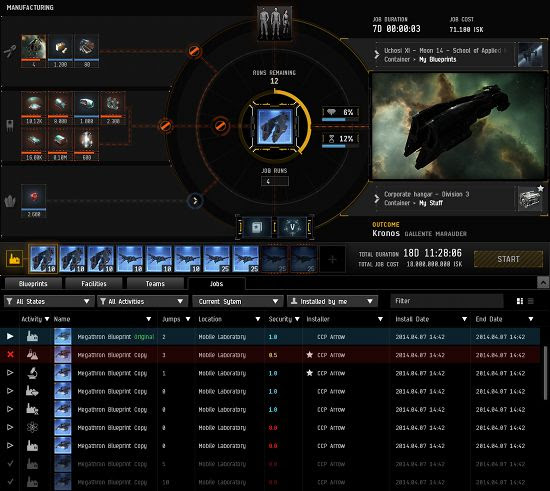 Is that a working queue there in the middle?  It sure looks like it, including a very log duration timer and a big "Start" button.

But more than that: This is a beautiful interface.  Crowed, sure.  Would UX designers I know have all sorts of complaints, sure.  But it is such a departure from the spreadsheets in space of Eve.  Carry this kind of philosophy across Eve and you could really revitalize it in a way that will help impress new players.

I won't try to comment too much about the details of the Dev Blog.  Other people have done better jobs (Eve-Prosper, Neville Smit), plus we have a lot that we don't know coming in the promised next 3-4 blogs.  The change coming is big enough that I see several industrial blog writers mentioning that they're putting their production on hold because they don't know how much it will turn upside down.  I suppose when you're doing long-chain things like capitals and supercapitals then a change a few months down the road is a too soon.

I do see profit margins dropping on my industrial alt's T2 products.  It could be localized, it could be temporary, but I haven't had time to dig into it yet.

I don't expect I'll be flying a pirate battleship anytime soon, since I'm pretty much focusing on cruiser and down right now.  However it is interesting to see the threads on the pirate cruisers and battleships.  I would like to try out some of the cruisers, though I'm trying to keep more control over my ISK losses after I knocked it down pretty heavy with some special events a while back.  From hearing people talk I should fit up my Cynabal and get out there and lose it before it gets nerfed though.

April Fools for NOS Changes?  Apparently not.  My big question here is whether those of us who tend to fly cap intensive ships are going to find ourselves facing an increased disadvantage by this effects of this in the meta.  Now you could say that this means you should fit more Nosferatu on your Amarr and Gallente ships, but I'll point out that most ships in those factions don't have utility high slots.  Yes, there are exceptions - will those become the new meta?  Will cap-transfer become a bigger need for fleet logistics?  Maybe I need to buy a Augoror or two and start getting used to them.

I've used a capacitor battery once, on one of my most expensive losses at that, and it did do a very nice job of keeping me up and firing under cap pressure.  But I also admit it was only there because I had to refit the ship quickly from self-rep to buffer and run to join the fleet.  Will we see more cap batteries out there?

So CCP will be opening up voting tomorrow for CSM 9.  I haven't been as thorough in following the candidates this time around, though I think I've listened or skimmed almost all of the Cap Stable podcasts.  I have some suggestion for future candidates and then I'll list my top slots.

Future Candidates: Things not to say when you're running for CSM


Top 5 for My Ballot

Notable but Not on My Ballot

Posted by Unknown at 1:45 PM No comments:

Today is a random collection of items that aren't big enough to make a post, but I really ought to stop stalling on.  Let's call it Appreciated or Not.

Appreciated - YOLO Golem
Kudos to CASIO BRAN for bringing a Golem out to play outside a FW plex and taking on all comers with the massive power of fireworks launchers. (https://zkillboard.com/detail/37681848/) Rifterlings piled in and took a few shots at him, but then mostly kept fighting the waves of other people who came to join the fun.

Not Appreciated - Suggesting that a PC corp is better than an NPC corp
Apparently at least one person is a big defender of the honor of NPC Corps.  I have an indy alt that is still in an NPC Corp.  While moving from system to system I noticed a newbie question in corp chat and spoke up to help out.  Basically the person was misunderstanding stacking bonuses and ECM and thought that a couple sensor damps or a flight of ECM drones could guarantee breaking a tacklers lock.  I suggested that the newbie look at joining a group like EveUni or Brave Newbies so they could get some good mentoring.  One person in the NPC corp was apparently offended, saying that no PC corp was active enough that they'd always have someone around in corp channel that could help - as opposed to the wisdom of the NPC corp collective.  I disagreed and didn't want to argue, that alt was done with their job so I said good bye and logged the alt off.  Next time I logged on my alt had a bounty on them (1M ISK I think).

Appreciated - Continued Fights with Rifterlings
A month ago I mentioned how I was in on more kills in February than I had been on any previous month, barring ones were I got in on big events like FrigFest.  Recently I was despairing that it seemed like I hadn't been able to do nearly that much PVP in March because of real-life busy busy.  Turns out that actually March I was on more kills than in Feburary, and on a much higher total of ISK destroyed.  The latter is largely thanks to the shiny-fleet roam earlier this month.  These are all still pathetic kill numbers by the standards of serious-business-PVP, but I'm only comparing against my own history.

Not Appreciated - CONCORD doesn't love me
I tried slipping into some ratting between roaming in an attempt to keep my sec status up.  This was largely after I got surprised a while back when I found for the first time that I couldn't get into 1.0 systems - where a lot of my assets are.  But the PVP, it is too much, and my sec status keeps slipping down.

Appreciated - Tags4Sec
So I set a simple plan.  I will hunt down sec tags slowly over time and set them aside rather than selling them.  The goal is to have enough to get me back to 1.0 from -5.0 (or whatever depths of badness I sink to).  This is one of the reasons I like the low-sec "pirate" life better than FW - if I want to reset my life and do something else I can dig my way out.  With FW the only option would be to grind missions - preferably after finding someone with high opposite-side standings who could fleet with me on their L4s.

I also hear that ratting in nullsec is good for this, so if I can find a WH into null I might try some of that, though it will probably end me jumping on some nullbear ratter and undoing the benefits just prior to a local gang finding me and podding me before I can get back to sweet, sweet lowsec.

Appreciated - Bonus - Readers
I almost forgot.  I got a nice convo from a fellow I had met before.  He sheepishly admited he was part of the gang that had just killed me as I tried to race back to my supplies in a LASB Stabber which was out of cap charges.  Ooops.  Anyway, he complimented one of my blog posts.  That's always nice to hear.  So this Appreciated is for you readers, particularly those who leave comments on the blog or otherwise drop me a line.  You help encourage me to keep writing.  Thank you!